Weaving a Connection Between Land and Self

Plants are integral to reweaving the connection between land and people. A place becomes a home when it sustains you, when it feeds you in body as well as spirit.

There’s an arable field margin under two ancient oaks that is species-rich with tall grasses because it’s never been cultivated. Like the haymaker, I time my harvest of the grass to the rain, sun, wind, and the setting of the seed. The armfuls of grass I’ve cut give off a sweet scent and this fills the studio, reminiscent of days spent playing in hayfields. Out on the wind-swept pastures there’s a wire fence where cleavers grow and are perfectly dried for fire-making tinder. Their burrs stick fast as I rhythmically pull and bundle the plants – back in the studio I find I’m covered in the small sticky balls, they’re inside my socks, even up the insides of my sleeves.

In the damp woods I check whether the sap has risen enough for the bark to release with ease. My knowledge of the stands of willow there has become more intimate: how one stand in the hollow takes up sap later than the stand on the southerly bank. Removing the bark, there’s a gentle ‘pop’ as it comes away. I lick the bare wood, and taste the sweet sap that’s left on it. My fingers and nails are stained by the tannins in the bark, and by the end my hands and forearms have the familiar ache from repetitive working.

Before the first frosts I forage horseradish in the lane by the river, for its long, creamy-white fibres, perfect for making cordage. Separating out the fibres, my fingers become damp and have a faint whiff of the fiery horseradish. In winter I visit the old clematis on the deeply-cut, chalky drovers’ road on the Downs, for its shedding bark, precious tinder for wild fire-making.

From my earliest memories of gazing up at wind-rustled leaves from the pram, of looking for ladybirds in the fragrant box bushes, of sitting amongst the dusty cypress boughs, I’ve been a lover of the natural world. And since I was knee high I’ve been a maker, encouraged by my mother, also a maker.

When, in my late 20s, life took unexpected turns, I sought refuge for some time in the verdant hills, valleys and fields of Devon. It was there, in the silence and stillness of long months, that I recognised the depth of my need for a deeper connection to the natural world as a way to make sense of my life and to give it meaning. I read Mary Oliver’s poem ‘Wild Geese’, and realised I was searching for what she describes as a sense of my place in ‘the family of things’. In fact, it felt as if my survival depended on it.

In the enfolding landscape of Devon I spent those months learning to be still like the trees in the quiet wood; letting the wind play through my hair; walking barefoot on the flanks of the earth, rain on my face. I became more intimately acquainted with small woodland birds, tall trees on the hill, the waning moon behind bare ash branches. In time, at moments, I felt part of the weave, that I had a place amongst other things. Not foreground to them in the way we humans often behave…and not less important either.

I began making objects from found, natural materials which I gathered on my wanderings. Each piece embodied a sense of the place, the plants and creatures there, the weather, my state of mind at the time. I continued with further creative explorations and craft training in basketry; I discovered experimental archaeology, how our ancient ancestors would have foraged all their material resources from the land around them. How they processed raw materials for pottery, metallurgy, buildings, textiles, basketry.

The origins of basketry are entirely rooted in place. All basketry traditions are based on the local native plant species, on what could be foraged that was useful. Making techniques developed that suited the specific materials – binding, twisting, stitching, weaving – various ways of joining long, strong and flexible plant fibres. Though there are few basketry remains from our distant ancestors, there is evidence of it from at least as far back as 9,000BC in the area we know as Iraq. The basketry techniques used then are virtually unchanged over time…and can still be made only by hand, not by machine.

Here in the UK we have the traditional use of a number of plants for basketmaking: willow rods; woods such as ash, oak, hazel, chestnut, which are split and woven; rush; grasses; roots; bark. Over time many of these plants have been cultivated and managed, to provide a reliable and steady supply of materials, resulting in coppiced woodland, rush bed management, osier beds.

It takes time to get to know which plants will yield useful fibres in a place. It’s a relationship that evolves, with an understanding of the many different elements involved. Observing which plants grow where; recognising the various soil and weather conditions that influence this; how the seasons are in a particular year, or were the year before; habits of other creatures who depend on the same plants. You also observe what else grows nearby, becoming familiar with the communities of plants there. All your senses are fully engaged in this evolving relationship. 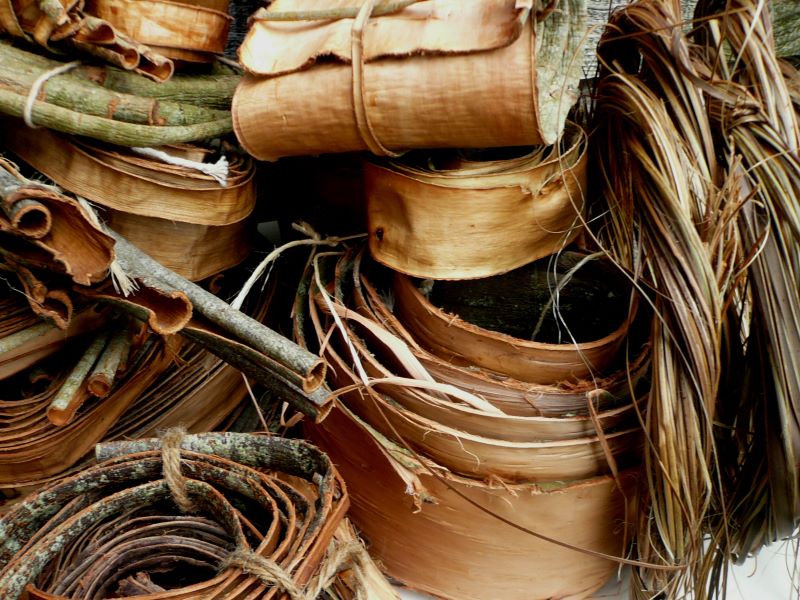 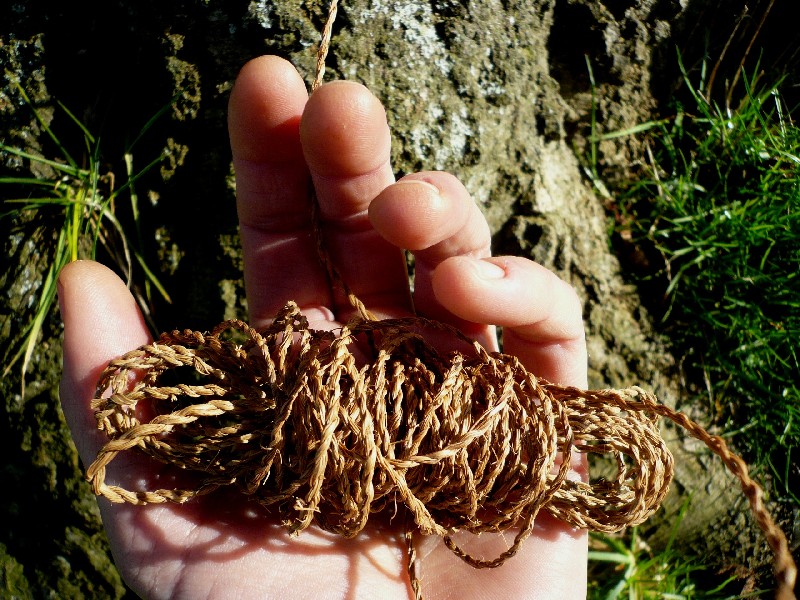 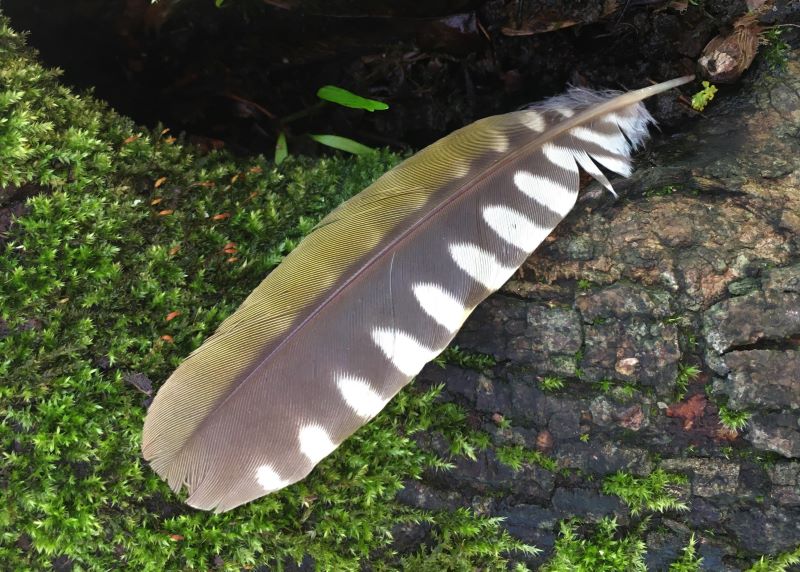 You develop a mind map of the place, and a sensory map. On regular routes of travel and wanderings near where I live in Sussex, this map has continued evolving: seeing in more detail what grows where, how the wild rose in the hedge that’s been cut by the farmer grows better on the other side; how the berry-rich hedgerow on the south-facing clay-rich field yields particularly vigorous rose whips. I choose and cut them carefully to encourage new growth for next year, to allow plentiful fruiting for the plant, and new, strong growth for my needs. The sharp thorns catch on my clothes and skin, a few sacrificial drops of blood. In the studio later, warming and bending the rose rods into hoops for baskets, there’s a gentle cracking sound of the fibres as they yield under my hands.
This year was good for vegetative growth because of the wet, mild spring we had, so reed mace was healthy and abundant in the ditch. I could cut armfuls, leaving plenty behind, including the ones which had wainscot moth larvae burrowed in them. Separating out the reed mace leaves to set them out to dry, their clear, mucilaginous gloop covers my fingers. 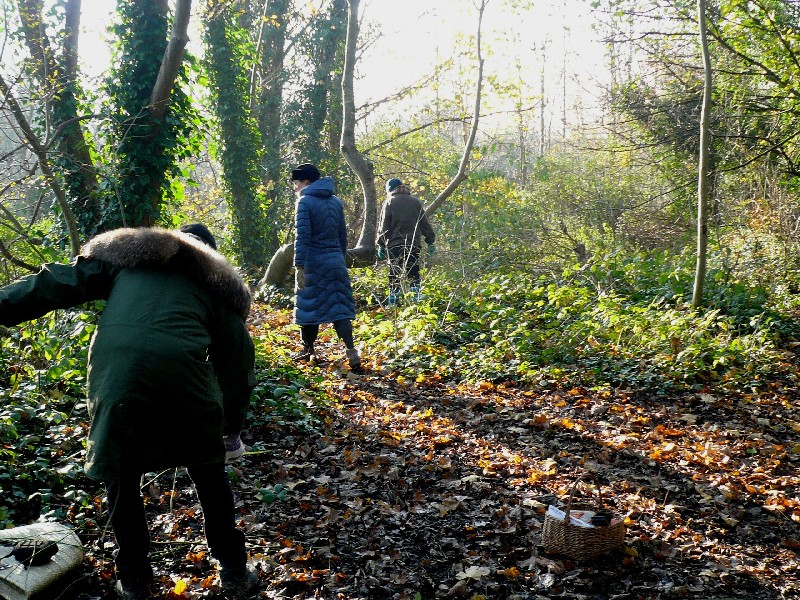 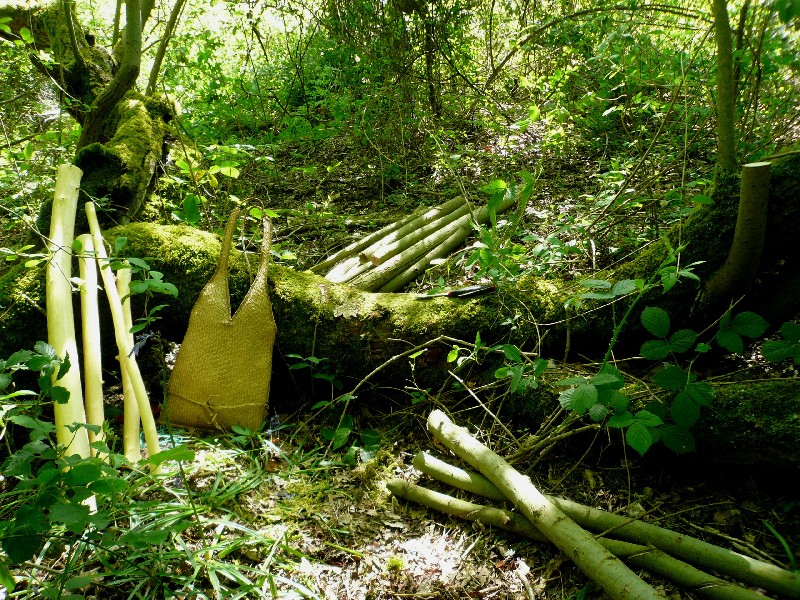 Somewhat like the basketmaking itself, foraging is an activity that has its own rhythm: you can’t rush or predict the time it’ll take. You have to tune in and respond accordingly. Although the need for something sharpens the seeing, the eyes take time to acclimatise.

As you start to forage, the wild mass of brambles growing on the woodland floor in front of you gradually becomes more discernible and the useful bramble for weaving shows itself. It snags on your ankles, catching you unawares. Meandering through the coppice looking for hazel rods, you begin to discern which are truly straight for making a bow drill spindle, and which have just the right curve for making the bow itself, or for setting into basket hoops. The ripe, rotting smell from the leaf litter rises and blackbird alarm calls announce your presence.

Keeping integrity and responsiveness in this relationship, there are often times when I can’t harvest what I went out for. Perhaps the plants I had in my mind map haven’t flourished this season, so I don’t gather them. Maybe something else will show itself, or possibly nothing will that day. It requires me to be centered, quiet and awake to the place, to the plants, the weather and other elements. I must put aside my own time frame, my attachment to outcome.

This way of relating to the plants brings a sense of connection and intimacy, a feeling of belonging in this place. I abide by the precept of the ‘Honourable Harvest’ that Robin Wall Klimmerer describes in her book Braiding Sweetgrass: