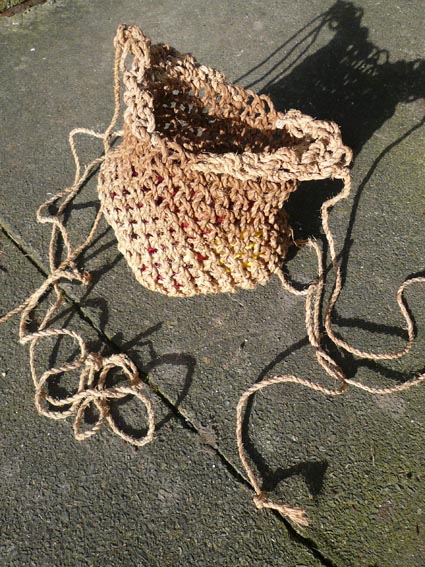 I was inspired to make this piece using twine made of lime and foraged willow bast, after hearing about archaeological finds of looped fibre fragments from the late Mesolithic period (middle stone age) found in Denmark. That’s around 9,000 years ago, pre-agriculture, when people lived hunter-gatherer lifestyles.

Origins
Few basketry remains are found from that time because of decomposition, but in boggy areas like in Denmark some fragments have survived and been recovered. They show a looping technique which is similar in structure to coiled basketry, which in turn hints at the origins of pottery. 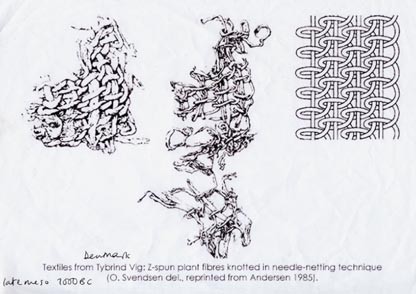 There’s evidence now of  twined fibres dating back 90,000 years in a French Neanderthal site, the oldest known use of this technique.

Bast
Bast is plant fibre collected from the inner bark of trees. These fibres, which give strength to the stem, need to be separated from the woody core, and also from the outer bark. The process for this is called retting, and is done by micro-organisms either on land or in water. 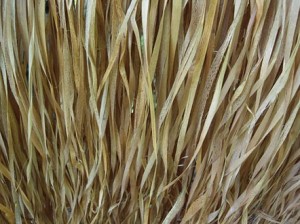 Lime and willow bast are both good, strong fibres and have been favoured by makers for millennia. The Antrea net, the oldest known fishing net in the world, which is made from willow bast, is dated to 8,300 BC. The well-known Tyrolean Mesolithic find of Otzi the Iceman included his cape, dagger sheath and footwear, much of it made from lime bast.

Making the looped bag
With the expert help of artist  Shuna Rendel I learned various looping techniques. The lime bast was beautiful quality – long, strong and clean. I also had some willow bast foraged from a fallen tree near my home, and the previous winter’s weather had done the retting for me.

Making the twine
Twisting and plying the fibres into a metre or more, looping it until the length ran out. I used a long, blunt, large-eyed needle for the looping.  It’s a simple into-the-lag type of looping, in a spiral from the bottom up. Different from the Danish Mesolithic fragments mentioned above, which were looped over a core. 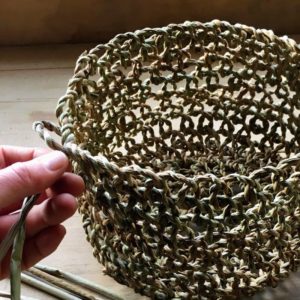 It stretches open when you put something bulky into it and has a delicious, woody smell and a pleasing colour variation from the different basts.

I didn’t bother to count the hours it took. Or the number of times I undid it to get the tension more even or to correct the shaping at the top edge. The methodical, rhythmical action of the twisting, plying, looping was so absorbing.

You can learn how to make natural cordage and looped net bags from foraged plant materials on a Native Hands course.